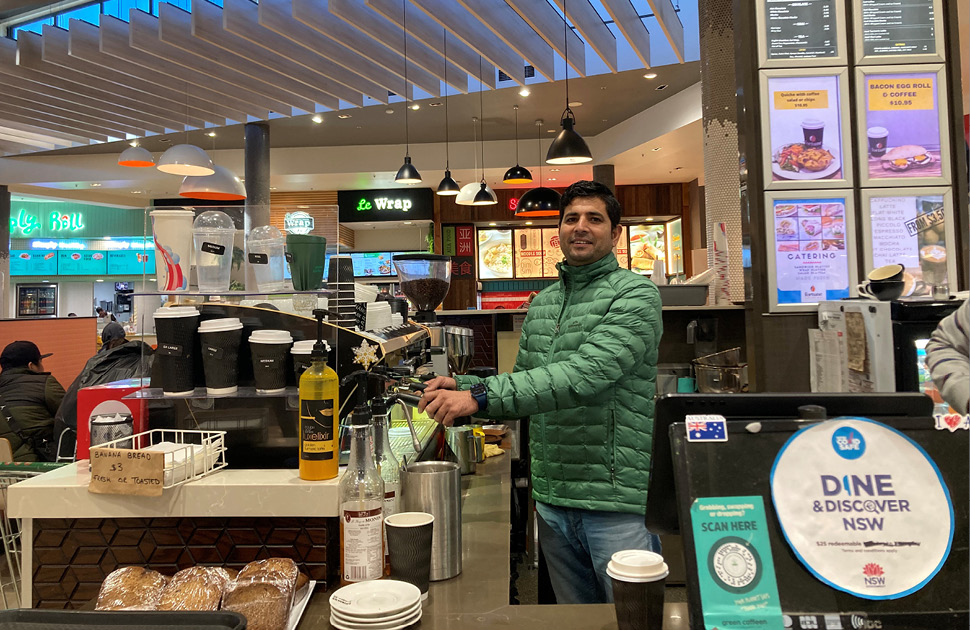 We recently sat down with MK to ask him, what it is, that he loves about owning Fortune Café and Fortune Café &Grill in Lake Haven Centre

Murari can’t recall exactly how old he was when his parents nicknamed him MK but to this day, it stands.

He was born in Rajastahan, a state in northern India and home to 10% of India’s total geographical area.  It is the largest Indian state by area and the seventh largest by population with an estimated 81 million people.

It was MK’s grandfather who convinced him to do a carpentry trade and work in the building industry.  He did this up until the age of 28, when he knew he wanted more, not just from a work perspective but a complete lifestyle change.

He decided to relocate to another part of the world.  On his radar was America, Australia & Canada.  It was lucky for Australia, that 2008, he took a leap of faith and came to settle in Parramatta.

MK lived in Parramatta approx. 6 months, but he wasn’t completely happy, it didn’t feel like the escape he craved after moving from a city of 81 million people.  He wanted an even quieter lifestyle.

He then decided to move to the Central Coast, to a suburb called Mardi, and never looked back.

Work was the next thing on his agenda, he took on numerous part time cleaning jobs, worked at Love Salad, Tuggerah and then La Bocca Woodfire Pizzeria and Restaurant in Budgewoi for 3 years.  He loved working in the food industry/restaurant industry, but the fumes emanating from the Woodfire oven played havoc with his health, so he needed to once again, find a job.

It was by chance, he was speaking to a friend, who happened to mention his brother was selling Cinnamon Bean Cafe in Lake Haven Centre.  MK had not even contemplated being a business owner, prior to this opportunity, presenting itself.   He met with the owner, and he said, ‘it just felt right, I had to do it!’.  He went to the bank, loan approved, all documentation finalised, and he was now a proud business owner in 2013.

The business grew from strength to strength, allowing him to then open his second cafe in Lake Haven, being Fortune Café and Grill in 2015.

We asked MK what do you put your success down to? He replied, ‘hard work, commitment and a love of what you do’.  MK has been at Lake Haven since 2013, and he says he still wakes up every morning and loves coming to work.

MK has a passion for food, making everything fresh daily. He also has a genuine love for people of Lake Haven.  When a food/café business has up to 80% return customer base, it says he is doing everything right – the boxes are all ticked, the food is good, the coffee is spot on, and the service is impeccable.

MK married in 2002, has 2 beautiful daughters and moved to Lake Haven in 2018, as his youngest daughter attends Lake Haven Grammar.  He loves the area, has great neighbours and when time permits, participates in local community work.

“This Centre has been good to me, yes there have been challenges along the way, but that’s the case with all businesses - I wouldn’t change anything.”