HEALTH & WELLNESS IS OUR COMMITMENT 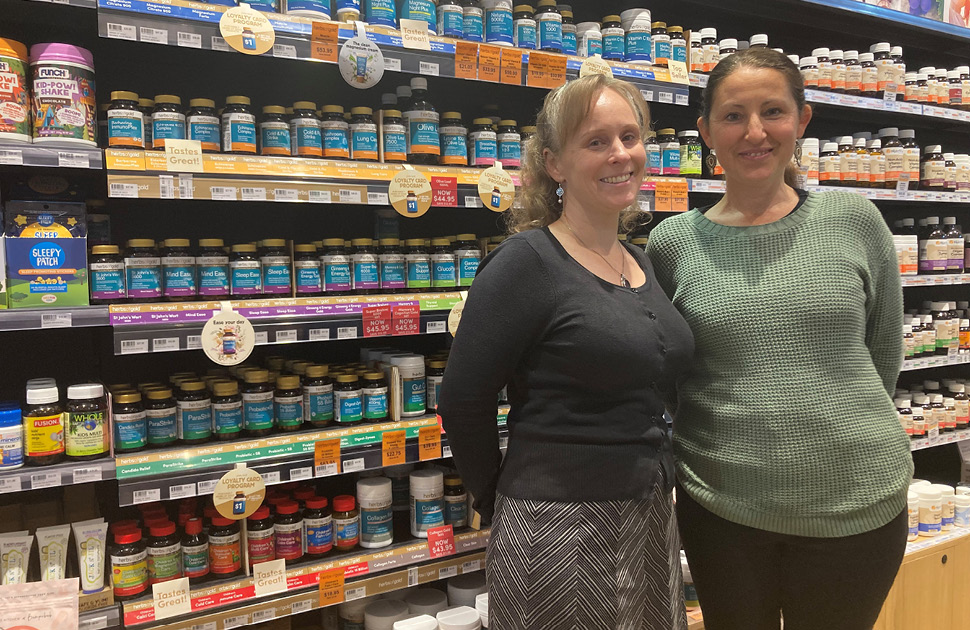 Living a healthy life is a high priority on the agenda of many people these days.  Which is why we decided to sit down with Susie and her best friend Tiff to find out their story and the success behind the Go Vita stores at Mt Hutton and Lake Haven Centre.

Susie grew up in Western Sydney near Penrith, and after leaving school, there was never any doubt, as to what she wanted to study, Naturopathy.

After studying for 4 years, at the age of 21, Susie had her degree.

Her first job was working as a massage therapist in numerous retail outlets in Sydney.

The friendship between Susie and Tiff goes way back when they first met working at a pharmacy in Sydney.  They immediately connected, they talked all things health, and had the same unrelenting passion for the industry.

Tiffany has 2 degrees, being, Naturopathy and Chinese medicine.

Susie met her partner while both at school and married in 1998.    They knew they wanted to raise their children by the water, so with two children under the age of three they packed up their lives and relocated to Lake Munmorah, where they have lived for over 18 years.

In 2005 both ladies decided to open their own naturopathy clinic, and called it ‘Health Potential’ in Toukley, which was a success in the short time they had this business.

Both working 2 days a week each, in turn allowing them to spend time with their children.

Some 4 years later, they decided being full-time mums was their top priority and reluctantly agreed to sell the business.

Susie practised from home for a further 5 years, and then took a role in a local pharmacy.

In 2017 Susie was getting itchy feet and owning her own business was again on her radar.  She searched every health-related business as far as the Sunshine Coast, and it was ‘Healthy Life’ in Mount Hutton a 20 min drive from her home that she decided was going to be her next business venture.

Susie and her daughter were devoted to the store, but the hours were starting to take a toll on both.  So, who was Susie going to call, of course her best friend and business mentor, Tiff.

While ‘Healthy Life’ was performing well, both ladies kept referring to the days when they worked at the Go Vita Store in Lake Haven.

They loved the Go Vita Franchisee business model which has been around for over 30 years.  Each store belongs to a co-operative and is individually owned and operated, this makes every store unique and was key to what Susie wanted.

Susie says, “Go Vita has built a solid reputation as the shop to go to for trustworthy, professional and personalised health and wellness advice.  In addition, they offer the most diverse range of products and services, we knew converting to a Go Vita store was the right decision for us.  To this date, I have not looked back”.

I asked Susie how the store at Lake Haven came about.  Susie says “It’s a funny story, I actually attended a Go Vita conference in 2020, and asked their leasing executive if anything comes up at Lake Haven could you let me know, and he replied there was a shop near Woolworths.  I knew the Centre well, as both Tiff and I worked in the previous Go Vita shop there some 17 years ago, this space is now occupied by Telstra.   Another thing, probably the most important for me during this time was to get my mums thoughts on opening a second store.  Mum was quick to respond, just do it, she said”.

The store opened April 2021, 10 weeks later NSW was hit by the second COVID lockdown.   Susie said “things have been difficult during this period, but we are now on the up!  We had our first-year anniversary on 13 April this year.

Susie employs three full time naturopaths and one trainee, all of whom like herself and Tiff are committed to each and every individual customer.  It’s what we do, we aren’t here to just sell vitamins etc.  We studied for years, so our customers know when they come to our store, we give them trustworthy, professional, and personalised health and wellness advice, with our extensive range of products and services.

Susie said, “To this day, we still have customers coming to us when we owned Health Potential back in 2009, also many customers walk into our Lake Haven store embracing the fact we have returned to the Centre and still have their original Go Vita memberships cards from when the old store was here.

I asked both ladies what they do when they get to have some down time.  Susie thrives on energy, loves long bush walks, walking her dogs, travel, and watching her daughter play for the Central Coast Mariners Soccer team.  Tiffany on the other hand, said the kids keep her extremely busy, but when she does get some space to herself, loves to make soap, and read.

Mention this story to our staff at the ‘Go Vita’ store in Lake Haven, & you will receive a 20% discount on their range of supplements.