"Fishing While Eye Testing ? IF ONLY" 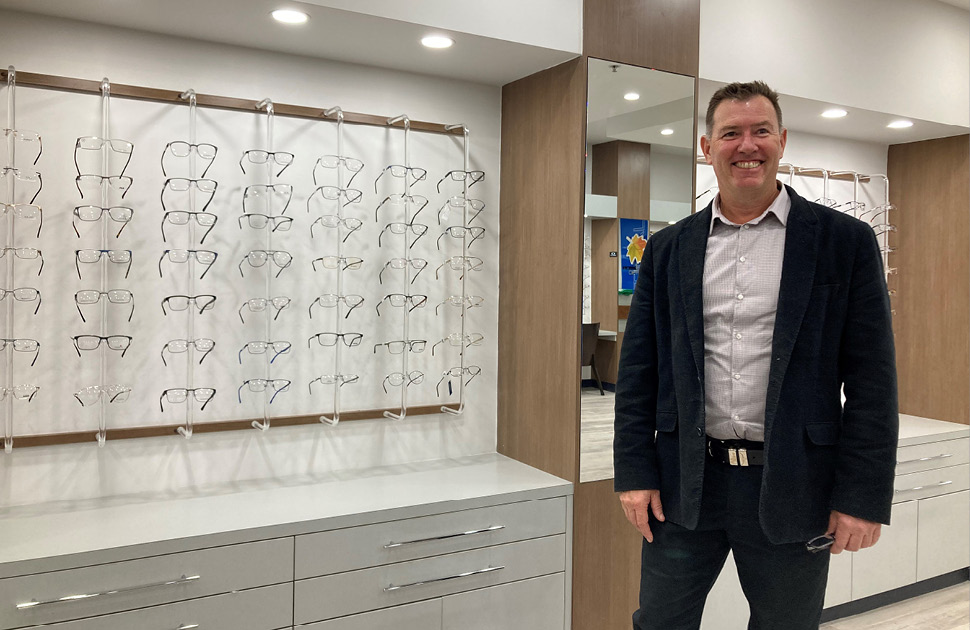 We recently sat down with Ross Brown to find out a bit more about the man behind the Brand, and why he continues to love serving the Central Coast and Newcastle community.

Ross was born in Wales, UK and at five years of age his family decided to relocate to Australia on their own.

We asked Ross what the reason behind such a bold move was.  He replied, “Two reasons, first Australia provided far greater employment opportunities for our young family and secondly the warmer weather as my father loved to swim and fish”.

He grew up in the Sutherland Shire, fishing the Woranora River and after leaving school, didn’t really know what else he wanted to do.

Ross said, “When he went to enrol in university, he really didn’t have a clue what he wanted to study’’.  For some unknown reason he chose Optometry, not even knowing at the time what they did. Who would have known?  he absolutely loved it.

His first job was in 1994, conducting eye testing for Medicare, running between three shops, Belmont, Lake Haven and Tuggerah.  Ross advised, “In those days that’s all many of us did, only eye testing, in small stores next to the big international spectacle companies”

Although Ross was loving what he did, he wanted more control of the end result, so he decided to open his first independent shop in Swansea, and by 2006 he had 9 stores.

All stores were incredibly successful.  ‘This success was due to a very simple idea; combining the care and personal service of a small independent optometrist with a really large range of quality frames that normally only the big chains provided”.

He was now a serious competitor on the Central Coast, so much so, an International Company ended up taking over his business.  The Lakehaven store he just couldn’t bear to lose as he had so many long-term customers there and it was an easy drive from home. The deal for the rest was done, and he hasn’t looked back since.

Ross then focused on Lake Haven for a further 2 years but couldn’t resist the temptation to open an additional 2 stores - Belmont and Tuggerah.

Now Ross is happy with his businesses and has no desire to open any further stores in the future.  In his words “Three are manageable.  My time is shared equally between all stores, and I get more time to do what I love, which is Eye Testing.  After nearly 30 years of conducting eye tests, I still have the same passion for it as I did when I first started.  The science is paramount in what I do and there is always something to learn.  I have a keen interest in how the eye works and the many things that can go wrong.

We asked Ross what it is, that makes Ross Brown Optometrist stand out above the rest.  He was quick to respond, “We give independent service to all customers, we have supply of glasses from some of the very best designers all around the world who produce high quality products.  If you want something unique, you will find it in our stores”.

Other than eye testing, Ross is still a mad fisherman, who loves taking his tinny out on Lake Macquarie.  He also drives north once each year to camp. And catch a big Barramundi. Can you do eye testing from a boat?

If you have never tried Ross Brown Optometrists, mention this story when making your booking and you will receive a 20% discount.  Experience the different a quality pair of glasses can make.